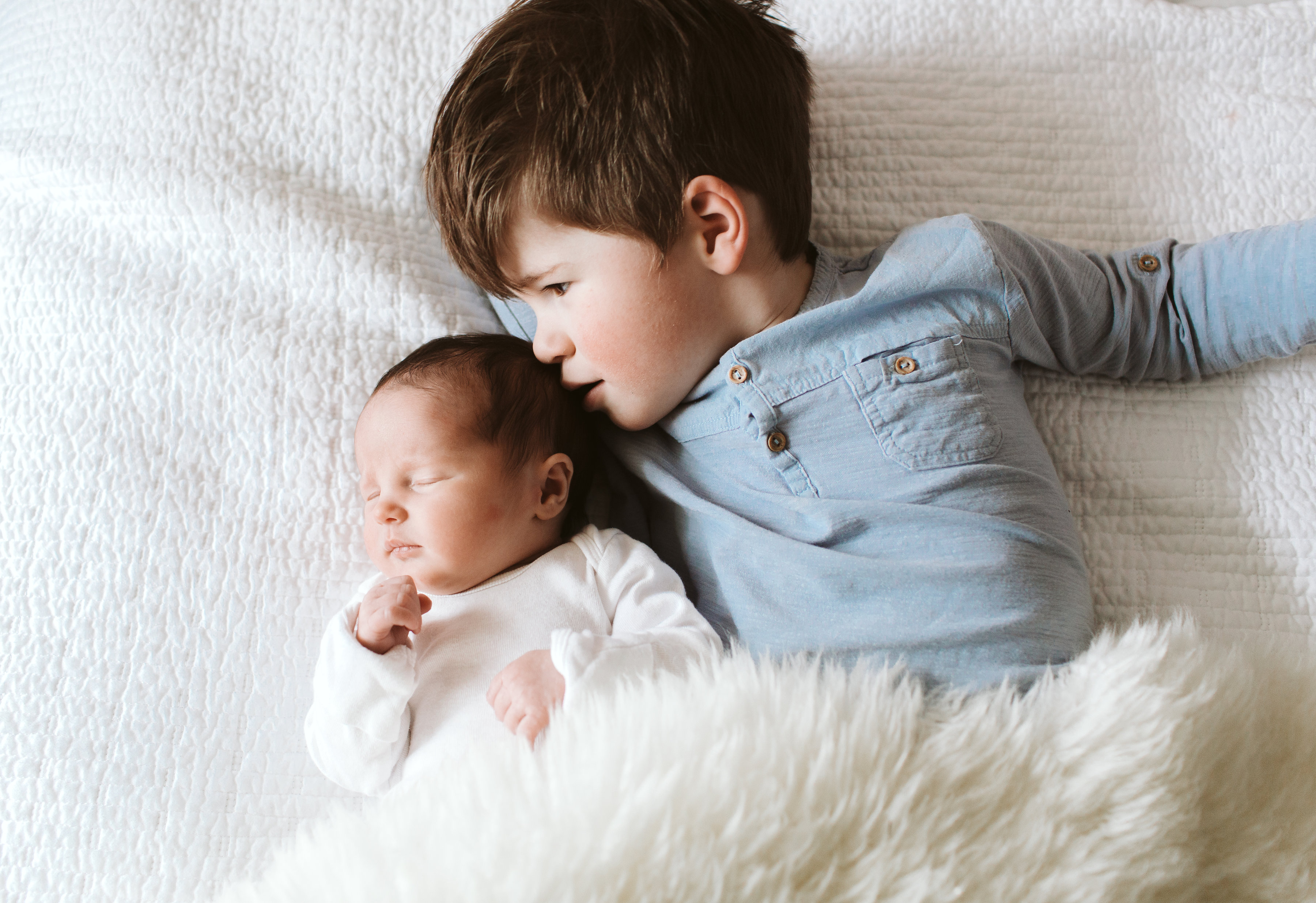 All photos by Rachael Alexandra

I knew having a toddler and a newborn would be tricky, and my mind boggles at how people manage two under two (you deserve a medal). I’ve had a lot of thoughts running around the last 8 weeks about what it’s like to raise two completely different, but still both completely lovely and needy human beings. While I’ve probably learned about 100 lessons so far, here are just 10 things I’ve learned raising a toddler and newborn. 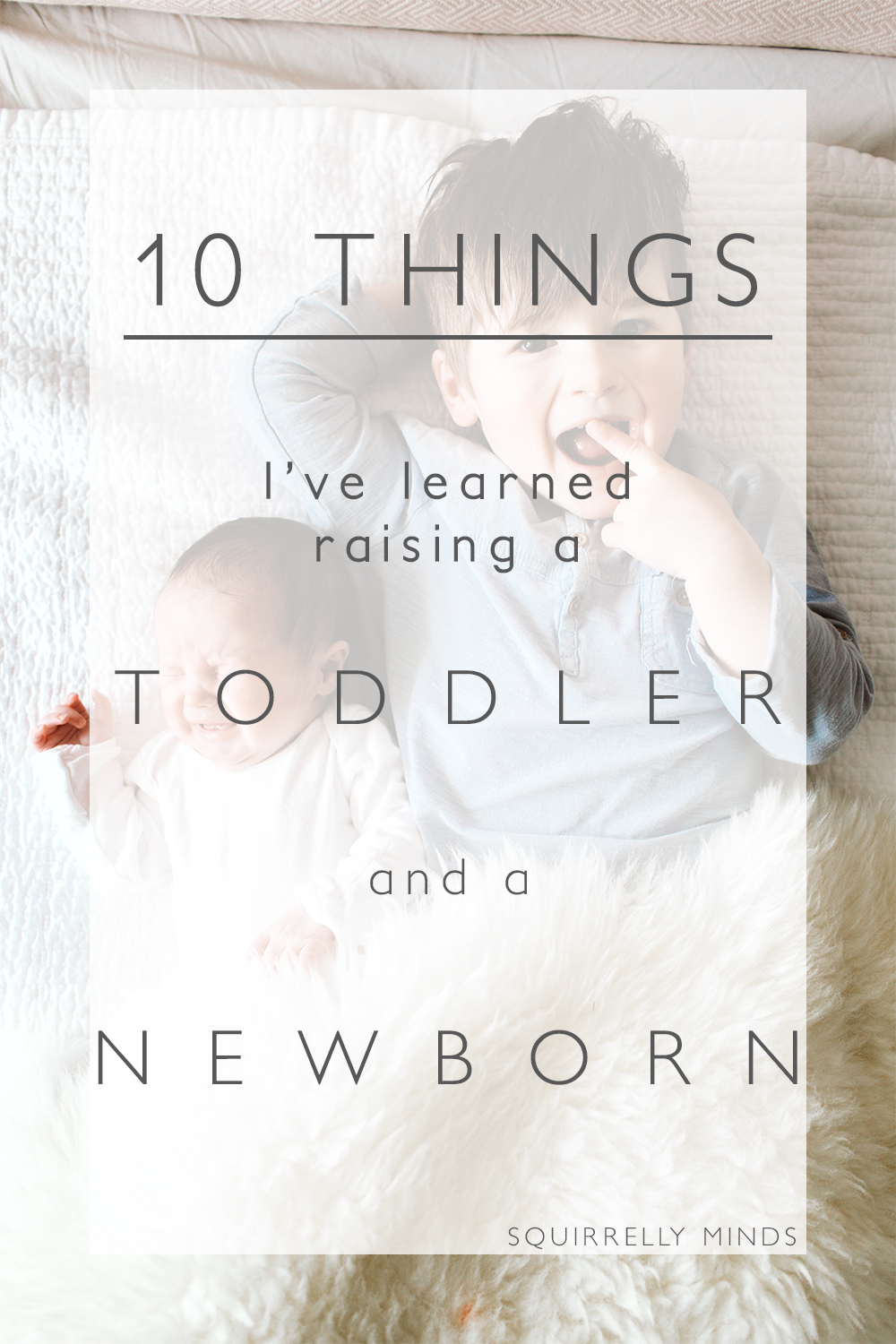 I still don’t know how I’m supposed to get the toddler a bath and down for bed solo with a newborn in tow. So far she’s always been asleep whenever I put him down for a nap, so I dread the day they’re both overtired and wailing. Having a pair of hands for each child is a life saver. I am lucky to not only have a hands on mister, but both sets of grandparents who are willing to help whenever needed. It’s hard to ask for help at first, but you quickly get over that out of sheer necessity.

Your newborn will cry more than your first born ever did

With your first, a bit of crying was inevitable, but on the whole you could immediately tend to their needs. This is not the case anymore. As much of an expert as you are at functioning with a newborn perched in one arm, there are things you can’t do one handed – dressing the toddler or helping them go potty for example. So you’ll have to put your newborn down and let them cry while you rush though these tasks as fast as possible, soothingly calling “It’s ok! Mumma will be there soon!” while your heart aches with every wail.

Our first day home from hospital, I was nursing 30 hour old Estie in our room while 29 month old squirrelly boy ran around the house shouting. I was so overwhelmed that I just sat there and cried while one nasty thought played on repeat in my head: “you can’t do this”. It felt like too much caring for a newborn while tending to the needs of a toddler, all while trying to heal from this huge physical endeavour of giving birth. I called my mom in absolute tears, and the toddler spent those first few days and nights between grandparents while we settled in.

Spending time with your toddler is crucial

All they want is you, and since you can no longer give yourself to them all day, fit it in whenever possible. Squirrelly boy’s jealousy consists of claiming the change table as his (despite not using it in ages) whenever Estie is on it. On a whole, he adores his little sister, and I think a lot of this has to do with us making an effort to spend a lot of one on one time with him. We were very lucky with the mister staying home the first four weeks, so giving squirrelly boy all that attention was much easier. Now that the mister is back to work, I make sure to wrap or hold the newborn while she’s sleeping in order to give undivided attention and extra cuddles to squirrelly boy whenever possible.

Imagine a drunk, uncontrollable giant stumbling through the town, inadvertently threatening to squash the helpless little people down below. That’s what it’s like having a toddler around a newborn. Kind of. Squirrelly boy is incredibly gentle, but even so my back stiffens every time he’s within arms reach of Estie. I worry he’ll trip and fall on her or put his hand on her tummy then press all his weight down on her while pushing himself up (which he has innocently tried to do more than once). Yep, mama is constantly on edge.

I had a 45 minute nap while both toddler and newborn slept exactly one time. Generally the newborn is far too unpredictable (and the toddler too eager to drop a nap some days) to manage a regular mama nap. Maybe I’ll be able to sleep when both are on a predictable nap schedule, but right now I’m living off caffeine and cuddles.

Getting out the door is TOUGH

Remember that point about your newborn crying? It’s the worst when you’re trying to get out the door. Maybe it’s just my toddler, but it’s this time he chooses to be a total space cadet. Mornings are spent getting a wailing newborn into a car seat she considers a torture device while barking at the toddler to “just listen!”. Then said toddler will bark back at you “listening mummy!” while you’re chasing after him to put on shoes and a coat and just get out the door on time. By the time you get both kids strapped in and you’re backing out of the driveway to the sweet sounds of newborn screams, you wonder why you bother leaving the house in the first place. Surely doctors make house calls right?

Aside from when we’re trying to get out the door, toddlers can be incredibly resourceful. As a rule, they want to help, so let them! If I’m nursing or changing a nappy, I’ll often ask squirrelly boy to get something I need – water bottle, clothes, a nappy – and he’s more than happy to help.

Because you’ve done this all before, you know how quickly it goes by. With the first born, you’re hurrying them through each stage (come on baby roll over!), desperately trying to get them to sleep on their own, and simply surviving. This time, you don’t mind (as much) that your newborn will only sleep in your arms, and you stare at them a little longer, knowing those tiny little features will grow up in no time.

You can relax a bit more

With your first, you’ve already consulted doctor google at 3am, checked their temperature hourly, and tracked every single feed, poop, and sleep cycle on your immaculate charts. The bonus to babe #2 is you aren’t agonizing over every little ‘what if’, and can enjoy them that much more.

10 ways on how to entertain a sick toddler

Living with gestational diabetes – my progress at 33 weeks